Faced with a growing district population, an existing K-8 enrollment 20 percent over building capacity and having suffered to referendum defeats, the Wallace Grade School District asked Basalay, Cary & Alstadt for assistance. A comprehensive feasibility study ensued and the problems were analyzed and concept solutions were developed with staff and community involvement. Three-dimensional modeling techniques were used in conjunction with public meetings to communicate the problems and the solutions to the voting public. BC&A’s role was one of partnering with the district to gain public approval. The next referendum passed and work began on a new facility.

However, the challenges were not over. The bond issue experienced a 15 percent shortfall of the estimated construction cost. Since there were no superfluous criteria in the building program, creativity and frugality had to coexist during the design phase in order to produce a quality, low cost facility which satisfied the district’s needs.

The existing building had very little reusable space. It was constructed of industrial, pre-engineered structures with corrugated metal siding built in three separate additions more suited for a machine shed than a school building. The first two structures were unusable, but it was determined that the last addition could be remodeled and reused. This saved some valuable capital as well as aiding in the phasing of construction, which had to allow for the continuation of classes during the construction period.

Other site improvements were salvaged and reused to reduce cost. Economical building materials were chosen carefully to hit the targeted budget. The bids came in within one percent of the estimated cost. The result was a new facility with an enrollment capacity of 500 students that met the requirement of the program at a construction cost of $71 per square foot.

A multi-purpose room addition was built in 1999 to serve as many functions including a cafeteria for the students who had been eating lunch in the gymnasium. In 2009 a large addition was built which included several new class rooms, science labs, a larger library, and a new larger gymnasium. The original gymnasium was not regulation size for competition and due to increased enrollment was again being used as a cafeteria. Some original spaces were remodeled to create a special education classroom, speech/hearing therapy rooms, and dedicated music rooms. 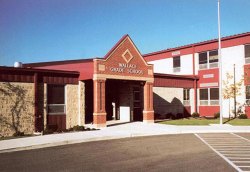 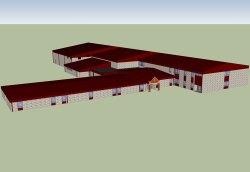